Curious finds and oddities, Hallo(ween) to Tom Noddy, I staggered back to the underground And the breeze blew back my hair, Lord Tomnoddy, Nobody but Tom Noddy knows it but you've got a secret smile And you use it only for me, Tom Noddy

Here is an update to the below post, I thought I’d show the original post and then add to it as there are a good few of you who never met Tom Noddy. Here he is, and now he is not alone . . .

Esme is a collector of the unusual, and the Cloud is home to many curios and odd fripperies. The other day she came across this little fellow on the Bay of E, and his name is Tom Noddy, or so his plinth says. He is made from some kind of pottery or resin perhaps, and stands (or rather sits) at 5cm from buttock to forelock. The plinth is 3cm squared, and he appears to be very old. 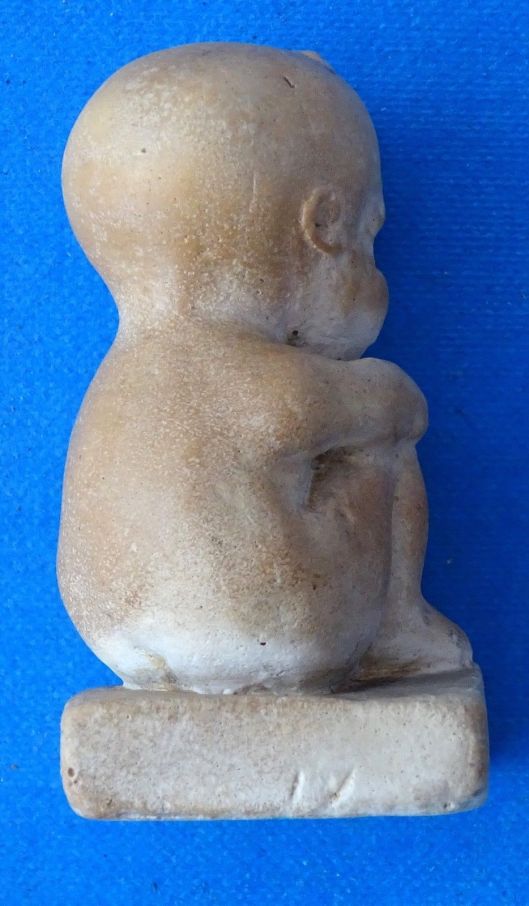 The seller knew nothing of his origin at first, and the web was simply chock full of articles about ‘Noddy’ the children’s character from the sixties. Then Esme found the following poem and shared it with said seller and he had an idea.

MY Lord Tomnoddy’s the son of an Earl;
His hair is straight, but his whiskers curl:
His Lordship’s forehead is far from wide,
But there ’s plenty of room for the brains inside.
He writes his name with indifferent ease,
He ’s rather uncertain about the “d’s;”
But what does it matter, if three or one,
To the Earl of Fitzdotterel’s eldest son?

My Lord Tomnoddy to college went;
Much time he lost, much money he spent;
Rules, and windows, and heads, he broke—
Authorities wink’d—young men will joke!
He never peep’d inside of a book:
In two years’ time a degree he took,
And the newspapers vaunted the honors won
By the Earl of Fitzdotterel’s eldest son.

My Lord Tomnoddy came out in the world:
Waists were tighten’d and ringlets curl’d.
Virgins languish’d, and matrons smil’d—
’T is true, his Lordship is rather wild;
In very queer places he spends his life;
There ’s talk of some children by nobody’s wife—
But we must n’t look close into what is done
By the Earl of Fitzdotterel’s eldest son.

My Lord Tomnoddy must settle down—
There ’s a vacant seat in the family town!
(’T is time he should sow his eccentric oats)—
He has n’t the wit to apply for votes:
He cannot e’en learn his election speech,
Three phrases he speaks, a mistake in each!
And then breaks down—but the borough is won
For the Earl of Fitzdotterel’s eldest son.

My Lord Tomnoddy prefers the Guards,
(The House is a bore) so, it ’s on the cards!
My Lord’s a Lieutenant at twenty-three,
A Captain at twenty-six is he:
He never drew sword, except on drill;
The tricks of parade he has learnt but ill;
A full-blown Colonel at thirty-one
Is the Earl of Fitzdotterel’s eldest son!

My Lord Tomnoddy is thirty-four;
The Earl can last but a few years more.
My Lord in the Peers will take his place:
Her Majesty’s councils his words will grace.
Office he’ll hold, and patronage sway;
Fortunes and lives he will vote away;
And what are his qualifications?—ONE!
He ’s the Earl of Fitzdotterel’s eldest son.

Lord Tomnoddy was no pearl as you can see, more a figure of scorn (a right tit as some say up north), and the seller said he reckoned the wee figure might have been used in a classroom way back when as a kind of punishment for being naughty. Much as a ‘dunce hat’ used to be ‘awarded’ to a bad child who was then made to stand in the corner, he thinks this chap was the symbol of a dunce, or an idiot, and might have been placed upon the desk of such a miscreant to bring forth scorn from their classmates and humiliate them for their crimes against good behavior.

The fact that there is ink underneath the figure makes this more likely. The ink is predominantly blue, but could have soaked into the figure any time between the day of its manufacture and two weeks ago, so it might not be relevant at all.

On the third side there is another word carved upon the plinth which I cannot quite fathom, though I believe it may begin with a ‘H’ and end with ‘rwood’.

Do any of you have a clue about him? I’d love to hear from you if so. There is also a link to Stanley Holloway on the Tube of Yoos, however said video will not play upon the Cloud

He has a cheeky smile whatever his background, and cost no more than six shiny pounds, so a fine purchase. Tom Noddy sits and watches Esme write,  smiling away wickedly as though he knows a secret about her that no-one else knows. And perhaps he does . . .

A week or two ago Esme received an email out of the blue yonder from someone who has another Tom Noddy! In four years no-one has ever come back to me with any further information until now when I received the following email from Terry:

‘I have found a twin brother for your Tom Noddy, I have been trying for years to find something about mine, mine I know was sitting on the mantle shelf over the fireplace of my mothers in the early 1940s, having read your blog on the subject in 2017, after I found the said Tom Noddy by doing a reverse image search, yours was the only pictures I found of him, I had decided that it was glazed chalk but know nothing else about him there is a date of 1915 engraved on the side and what looks like a signature but is unreadable, Do we have the only two left in existence ???? It’s been great to find him a mate he has been with me for about 40yrs and as I say I know he has in the family before 1940 only wish I had asked about him.‘

We are both hoping he’s worth a million pounds.

How exciting!! For me it means I finally have a date for Tom, as Terry’s version has an extra plinth below the first that has the date 1915 on it, so as I suspected he’s early 1900’s. He feels old, really old (not Terry, Tom) and the lack of a date was frustrating for me.

So I’m sending out a big thank you to kind Terry for getting in touch –  waves and leaves a plate of sticky buns for him and Tom. In another four years perhaps someone else will come along with a third Tom Noddy and more history to reveal and we can start having reunion parties. I’m leaving the comments up from the original post too as it’s nice to keep them (assuming the travel well).

esmeuponthecloud.com Unless specified otherwise, all content upon this site is the sole copyright of Esmeralda Cloud previously sonmicloud.wordpress.com and the cloud's admin user. © Esme's Cloud and esmeuponthecloud.com 2014- 2020. Unauthorized use and/or duplication of this material without express and written permission from this blog’s author and/or owner is strictly prohibited. Excerpts and links may be used, provided that full and clear credit is given to esmecloud and sonmicloud.wordpress.com with appropriate and specific direction to the original content. Please do not plagiarise, it is both unbecoming, and unfair to original authors. You have been warned. The Cloud does not take these things lightly.
Loading Comments...